How do LED lights work?

How exactly do LED lights work?

Instead of emitting light from a vacuum, like an incandescent bulb, LED lights use solid-state lighting technology (SSL). This technology emits light from the movement of electrons in a solid matter which, in this case, is a semiconductor. In LEDs, the electrical current only flows in one direction and contains two conductive materials that are placed in contact with one another. When electricity is applied to the LED, the atoms in one of the materials become charged with energy which is then released in electrons to the other conductive material. This release of energy is what creates the light in an LED. This is a different way of generating light compared to traditional lighting. Regular bulbs produce light by creating heat, whereas LED bulbs create light from the release of energy between two conductive materials.

What are LED lights?

LED stands for “light emitting diode” and they can be applied to a variety of different functions that we use every day. From lighting up the numbers on your alarm clock to illuminating a traffic light, LED lights are significantly more energy efficient than a standard incandescent lamp. As well as LED lights being more energy efficient, there are many other advantages to installing LED lights over incandescent bulbs. These include LED lights being able to last a lot longer than other light bulbs and also being a lot more cost-efficient to run. LED’s have transformed the lighting industry in recent years and are extremely popular in homes and workplaces across the world. 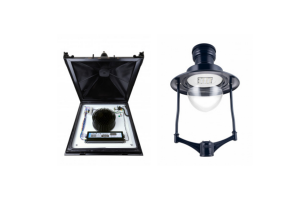 How do LED lights change colour?

You may be wondering how LEDs can emit light in a variety of different colours? Originally, LED lights only illuminated in one colour, white, but in more recent years more modern LEDs can display up to six colours with different shades in between. With modern LED’s you can display different lighting ‘temperatures’ which is a huge benefit. An individual LED light cannot change colour itself, a colour changing LED is actually made up of three separate diodes within the same bulb casing. Each of these diodes emit their own specific colour, either red, green or blue. When all three are switched on at full capacity a white light is produced and to create a colour  you just adjust the intensity of each individual diode.

At William Sugg and Co Ltd, our LED lighting solutions are suitable for all of our current luminaires. They can also be retrofitted to any existing lanterns should you wish to update your heritage light to meet the modern day lighting standards. If you would like to discuss your LED lighting options, get in touch with our team of lighting experts.