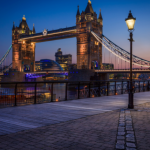 William Sugg and Co Ltd’s lamps have been a part of Tower Bridge’s history from the day it was opened by the Prince and Princess of Wales in 1894. The bridge was gas lit using around two hundred of William Sugg lamps that were placed in the centre of the carriageway as well as mounted on walls in the area.

Due to the progression of the landscape of the city and the advancement of vehicles, meaning there is now a lot more traffic, the lamps are now not practical placed in the middle of the bridge. The Sugg Grosvenor lamps have now been removed from the centre of the carriageway to allow for more vehicles on one of London’s busiest roads, but can still be seen in the Tower Bridge surrounding area.

Lighting Tower Bridge was not the only aspect the William Sugg and Co Ltd team produced for the tourist spot. With Tower Bridge being only a stone’s throw away from the William Sugg factory, the team also carried out the supplying and running of the gas and water mains, as well as produced the hydrants, tanks, hand pumps and manufactured the wrought iron gates and railings. 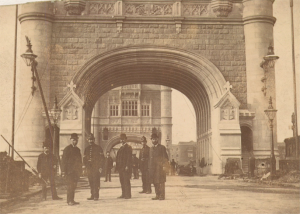 Our heritage lighting around London

Not only have William Sugg and Co Ltd produced lamps for Tower Bridge, our lights can be spotted in several other landmarks around the capital city. Another of the team’s proudest projects was producing gas lights to illuminate the exterior of Buckingham Palace. In 1901, we placed four-headed gas lamps on the gates of the Palace which can still be seen in the same place today, although the burners have been modernised over time. You can also find several of the original William Sugg gas lamps placed in the entrance canopy of the inner courtyard of Buckingham Palace and in the gardens.

Other places you will find some of William Sugg and Co Ltd’s lamps are in Trafalgar Square, the Houses of Parliament, Downing Street and the Tower of London. We hope that you keep an eye out next time you are visiting these famous landmarks now that you know their place in our history!

If you are looking for a bespoke heritage light for your next project, or need to refurbish a traditional lamp, get in touch with our team of lighting experts to discuss your options.