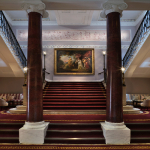 A torchiere is a tall, narrow floor lamp which is topped with an inverted shade directing the light upwards towards the ceiling. The name ‘torchiere’ is derived from the French word for ‘torch’ and directly translates to ‘candelabrum’. Torchiere lamps can come in several different designs from more modern and contemporary to the classic heritage lighting designs we can create here at William Sugg & Co. Ltd.

The first torchiere was created in France in the late 1600s and was a single candle mounted on a tall stand. When more light was required, this then turned into several candles placed on the stand, however this became an issue as the stand became top heavy with too many candles causing it to fall. In the 1800s, when electricity started to be used in private homes, torchieres were made with either a wooden or metal stand with usually a stained glass, frosted or opaque bowl shaped shade on top that featured intricate designs to protect people’s eyes from the glare from the electric bulb.

Many torchieres still feature the intricate designs on the shade but these can now be made from glass, acrylic, metal, plastic resin and more. Also, as electricity has advanced and discoveries have been made, the most common bulb used in torchieres nowadays are fluorescent light bulbs due to their cost-effectiveness. Torchieres can be used for either general lighting or decorative lighting to create an ambient atmosphere with careful consideration to the light source being crucial.

A recent project William Sugg & Co were asked to work on was to create and update the lighting at the Theatre Royal in Drury Lane. Included in this project was to install new Victorian style torchieres on the rotunda and up the balustrades leading up to the auditorium. We were also asked to create new free-standing torchieres for the ground floor of the theatre. One of the main aims of creating the bespoke torchieres was to ensure they were based off of a replica from the eighteenth-century country house Heaton Hall. To do this, we took 3D scans of the torchieres in Heaton Hall. Using this technology we were able to successfully complete this project and the client was very happy! The Theatre Royal Drury Lane is once again open for business and shows (Frozen, the Musical) can be booked on their website.