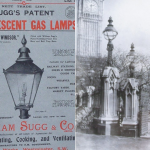 Street lighting is something we all take for granted. Walking down a street that is lit by streetlights may seem a very normal thing in today’s world, but there was a time that this was not the case. It all began with gas lighting, but when was gas lighting first invented and why? As experts in all things gas lighting, our founders were at the forefront of the industry’s rise and development.  Our historical consultant, Christopher Sugg, sheds some light on the history of gas lighting and it’s invention…

William Murdoch, who was born in Ayrshire in 1754, is known as the father of gas lighting. As the son of a man who was himself mechanically astute and an inventor, William applied himself early to devise a wooden horse for riding to school with his brothers presaging his later interest in and invention of the steam engine.

He had noticed how the addition of what was known as ‘parrot’ coal to the kitchen fireplace would increase the light in the room.  It seems he experimented with this coal; heating it in an old teapot borrowed from his mother.

In 1792 William was living in Redruth in Cornwall and was employed by Boulton and Watt.  It was during this time that he made a steam driven vehicle.  The story goes that on one occasion, he set off with so much noise of puffing that he frightened the local Rector into thinking he was being chased by the ‘evil one’!  Murdoch would apparently carry a bladder filled with gas with him.  This had a piece of tube attached from which a flame lit the way.

William lit his office and cottage with gas but was forced to abandon his experiments.  He did, however continue to use gas for lighting.

When was gas lighting invented?

In 1797 William advised Watt that they should patent his invention but was refused.  Back at his employer’s Birmingham works he devised and constructed equipment for making, storing and purifying gas.  His belief was that factories were restricted in their working hours very largely to daylight and that his invention could change this.  This apparatus was used to light the offices and a public demonstration was made in 1802.

Eventually, in 1805, William was contracted to light the factory of Phillips and Lee near Manchester. Apparently, the many hundreds of gas burners providing the light cost £600 per annum which compared very favourably with the £2000 that had previously been paid for candles. In addition, the quality of light was highly approved of by the workforce and the lack of sparks and no need for snuffing the flames out like candles reduced the hazard of lighting in a cotton mill.

Meanwhile, Frederick Winsor a German, had set up in London.  He had worked for Le Bon in Paris who had been developing gas for lighting extracted from wood.

At the Lyceum theatre he demonstrated a simple retort apparatus for producing gas and various lighting devices which he claimed as his invention and attempted to raise money to set up a National Light and Heat Company by extravagant claims of return for investors.

His poor language skills and very smelly gas did not endear him to the public but nevertheless when he arranged a live demonstration of lighting devices along the wall, fed a considerable distance from a retort in his house in Pall Mall, there was huge interest. William Sugg claims that his grandfather Thomas Sugg (who was an ironmonger) made the pipework and fitted up the devices.

So, who invented gas lighting, officially?

So as we have demonstrated the questions, who invented gas lighting, or when was gas lighting invented isn’t so straight-forward. Winsor, claiming to be ‘inventor and patentee’ of gas lighting, despite many earlier works such as those of Murdoch, proved how important it was to make it official. When a Bill was brought before Parliament to incorporate the London and Westminster Gas Light and Coke Company in 1809, Murdoch wrote a pamphlet petitioning the House of Commons praying to be heard against the bill and claiming prior rights. The Bill was thrown out but the promoters introduced another Bill in the following year and by accepting many conditions obtained an Act of Parliament from which a Royal Charter was granted in 1812.

So, to conclude, the first gas light company in the world, commonly known as ‘The Gas Light and Coke Company’ was incorporated. By the turn of the 20th century, things in the gas industry were changing due to WW2 and electricity was coming, find out about the end of gas street lighting in our next blog.