What does a coppersmith do? 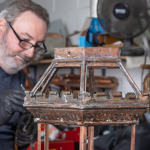 What is a coppersmith?

When it comes to the question “what is a coppersmith?” it is first important to address the history behind the human use of this important material. Copper is a soft metal and one of the very first metals that humans began to use to make things with.  Although an ancient craft, coppersmiths are incredibly skilled craftspeople who still have an important role today in many businesses and crafts.

Coppersmiths create high end, quality, detailed copper work and often work with other similar soft metals too.  In the past, copper was often combined with other harder metals (such as tin) to create bronze which was used for decorative items as well as weaponry and tools.

Where does the term coppersmith come from?

Strictly speaking, the definition of a coppersmith is someone who “crafts and repairs items made of copper and similar metals.”

Originally, coppersmithing was a very practical trade but what does a coppersmith do?  A coppersmith would make elements of highly technical products that assisted living a better and more easily manageable life including cooking, lighting and heating, amongst other things.  However, as industrial processes developed many of these functions were replaced by industrial processes and machines.  While coppersmiths still produce a small amount of highly technical devices by hand, coppersmithing is generally considered a skilful arts based occupation today.  Our resident coppersmith at William Sugg is Alan Jordan.  His skills are attention to detail are a critical part of the manufacture of many of the handcrafted copper lanterns that are located in some of the most prestigious locations in the UK and overseas. 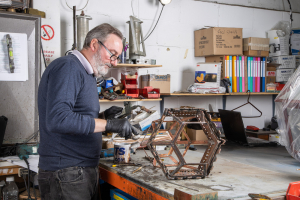 What are the other ‘smiths’?!

A coppersmith would traditionally be referred to as a ‘redsmith’ as the colour of the metal they worked with was red.  While coppersmith refers to someone who works with copper, other tradespeople working with other metals had a name that was denonted in a similar fashion.  For example, blacksmiths would largely work with iron and whitesmiths with tin.

How does a coppersmith work?

A modern coppersmith will generally work with copper in its cool form and use tools such as hammers and presses to shape the copper in the required way.  The tools and process used will depend on the piece that is being made, but it’s important to note that coppersmiths are handcrafters, and the level of decorative detail and complexity that can be achieved by an experienced coppersmith is unparalleled.

To ensure that copper will retain its flexibility as a cool metal, a coppersmith may heat the copper up and then cool it down again whilst moulding and shaping the metal.  This process is known as annealing.  Copper can be worked on while hot, but unlike iron (which when hot is called ‘cast’) it can easily be worked on when cold too. 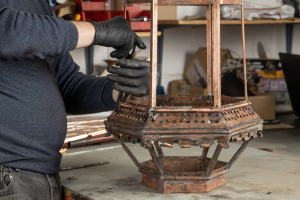 The modern coppersmith, as outlined above, works generally on decorative, high end products rather than practical or technical ones which, today, are generally made by machines.

Beautiful decorative copper items that are made by a modern coppersmith include decorative kettles and kitchenware, artworks, homeware, and in the case of William Sugg & Co. Ltd – beautiful handcrafted light fittings and lanterns!  The trade of a coppersmith can be considered artistic and technical and is highly skilled and is an asset to many types of business today.

Meet the William Sugg Team to find out more about our team and their skills.