London Lighting: A lighting tour of the capital 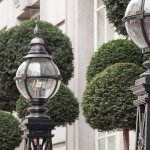 London is rich with culture and history – a city with some of the most recognisable landmarks in the world. At William Sugg & Co, we are very proud to be a part of this history. We have left our mark on this city. You’ve probably have seen us around without even realising. Allow us to illuminate this for you and give you our tour of the capital.

We begin at Buckingham Palace – the London residence of Her Majesty the Queen. On any given day, you will see tourists posing in front of the big black and gold gates taking their own momento of what is sometimes referred to as the ‘Queen’s House’. What you might not have noticed are the pillars on either side of this gate, or rather what is on top of them. We placed the four-headed lamps on Buckingham Palace gate in 1901 (preceding the palace’s facade that everyone knows and loves by twelve years) and we still maintain them today!

Less than a mile from Buckingham Palace, you will find another palace, commonly known as the Houses of Parliament. The Palace of Westminster is one of the most important buildings in the UK – holding both the House of Commons and the House of Lords. Running alongside the building is a place called New Palace Yard. The globular lamps that dot the edge of this square were made and mounted by us. Although the original lamps were melted down during World War II and later versions were moved during the construction of an underground car park, William Sugg lamps are still those that you’ll find there today.

Remaining on the political landmarks of London takes us half a mile up the road to No.10 Downing Street – the home and headquarters of the Prime Minister. The garden of this famous building backs onto Horses Parade, which most people will know from the Queen’s Birthday or War Memorial events. In between No.10 and Horse Guards Parade, you will find one of our finest creations: a unique Triple Rochester layered column decorated with cherubs and topped with three lamps.

Whilst our Downing Street lamp post might be one of our finest creations, there are some others you may have come into much closer contact with. Again we only have to venture half a mile or so to find them. Trafalgar Square is iconic: from the towering image of Nelson’s column to the lions keeping guard below. A detail you will have definitely encountered but perhaps not taken in as much as other more imposing sights is our three lamps. We mounted one of these in the late 1800s and adjusted the other two in more recent years.

As time progresses so does the landscape of the city. Therefore, there are some William Sugg lamps that have been removed for practical reasons. Our favourite is the lamp post that used to sit in the middle of one of London’ most famous landmarks. For this phantom lamp post, we have to travel a few miles up the River Thames to Tower Bridge. Now one of London’s busiest roads (more than 40,000 people cross over it every day) Tower Bridge was originally quiet enough to feature a William Suggs lamppost right in the middle of its causeway. We would recommend getting a picture on the exact spot but we’re not sure that’s the safest advice!

Lighting At Tower of London

One place you can get a picture with one of our works is just a stone’s throw from the one that was removed from Tower Bridge. Surrounding the gardens of the Tower of London are our iconic blue lamp posts. They were painted blue to keep in theme with the blue paint on the Tower Bridge and can be seen not just on the border of the gardens but in a larger part of that area.

So, there you have it: the William Sugg & Co. tour of London. We hope that on your next trip to the capital, you can spot in our work whilst visiting these famous landmarks.