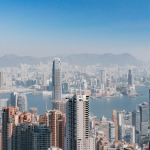 As experts in heritage lighting since 1837 many of the most iconic lanterns and light fittings were made by our forefathers.  Here, we look at a wonderful gas lighting restoration project in Hong Kong that the team were asked to assist with.

A history of the Hong Kong gas lamps.

Hong Kong was, until relatively recently, an outpost of Great Britain.  When their streets were lit with gas, it was William Sugg that provided the products which used a local supply of Hong Kong’s very own town gas.  (It wasn’t until later that natural gas was discovered below the North Sea.)

Amongst the many historic Sugg documents is a single copy of “Gas-Lighting at Home and Abroad” published in 1925 with an introduction that starts:

“The universal character of gas-lighting is, perhaps, hardly realised to the full, even by many of those engaged in the industry; and as we felt that greater knowledge on this point would be of benefit, we have taken upon ourselves the collection and publication of what we hope is an interesting series of photographs of gas-lighting installations.”

Some notable street lighting from Hong Kong was included in the publication; upright and suspended lamps that were similar to a Rochester or Regent design but whose official name was not 100% clear.  The name “Littleton” was given to the cluster burner that replaced the earlier series of larger mantles each fed by separate gas and air systems and generally known as the Regent lamp which has a body that looks like the Rochester.

Sugg Lighting was approached in the late 1990’s for information about the lamps on the Duddell Street Steps.  These iconic Hong Kong gas lamps needed some expert care and attention and the team in Hong Kong had begun their search for assistance with this important lighting restoration project.

Chris Sugg, the company’s Managing Director at the time, was able to confirm that the lamps were indeed made by William Sugg & Co around 1925 or a little earlier and the confusion surrounding the name and design was eventually settled too.  It was decided that the ‘Rochester’ name was to be given for the somewhat larger storm-proof lamps, and that the more curvaceous design would be named the ‘Littleton.’

An historic design based on the traditional Hong Kong gas lamp

The Duddell Street Steps lamp design was interesting; the original lamps were manually lit but clockwork controllers had been added externally.  Later models had a cast box to enclose the mechanism so the understanding of the historical design was critical to the success of this restoration project.

It then became clear that the steps including the lamps was listed as an Historic Monument.  Later on, the team discovered that these were in fact the final remaining gas lamps in Hong Kong and a wall mounted plaque provided the information to visitors.

What did the gas lighting restoration entail?

A large tree (shown in the photographs) had grown in a somewhat precarious location at the top of the steps.  It was believed that a very rare typhoon caused this tree to fall and, in doing so, had smashed much of the balustrade and two or three of the iconic lamps.

The Sugg team were invited to fly out to Hong Kong to see the lamps in person and ascertain the damage and the exact approach needed to restore them to their former glory. Following the visit the four lamps were sent back to the UK and were refurbished by the William Sugg team in the Horsham factory.  The Industrial History of Hong Kong Group and the Antiquities and Monuments Office sent a representative to oversee and record the process and there was much delight by all parties that this important restoration work was carried out by the original maker.

The spectacular lamps now take pride of place in their original position on the Duddell Street Steps.  They are in fully working order and function perfectly as well as looking as spectacular as they did when they were first installed!  Much to the delight of visitors today.

A short video illustrates everything from the damage caused by the typhoon, the whole process of reconstruction of steps and lamps and the final reopening ceremony.  Mark Jones, (William Sugg & Co. Ltd’s current Managing Director), and Christopher Sugg (great great grandson of William Sugg and Managing Director of the earlier family business) both feature.

AMO’s video of the restoration project