The history of Electric lighting 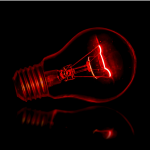 Our historical consultant, Christopher Sugg, takes a look at the history of electric lighting and how its use and development has influenced the lighting industry, and our way of life.

What was used before electric lighting, and when did it become common?

Before electric lighting, gas lighting was used to light houses, buildings and streets (find out more about this in our other recent blogs.)  Gas feels like a natural substance that can often be smelt and is clearly a ‘fluid’ but, before it became common, somehow electricity seemed much more mysterious and out of reach.

Despite perceptions, electricity is just as natural as gas. The most obvious and super powerful phenomena of an electrical nature is lightning.  However, those huge ‘bolts from the blue’ that crash to the ground with great drama bear little or no relation to the flick of a 21st century electrical switch. But there are thousands of years between these two ‘natural’ phenomena.

The earliest forms of electricity.

Taking it right back to the start for our guide on the history of electric lighting, we thought of our stone age ancestors who would have seen lightning but never ‘our’ electricity.  Static electricity was likely initially discovered when materials like amber were rubbed against other materials and produced a spark which would have made a person jump!  Naturally, the clouds charge the lightning, and the earth (or a large tree) would provide a point of discharge.  The flash will light up the surrounding area temporarily. Lightning can start a fire, so it is reasonable to say that fire was the first source of light that could be kept going as required. Starting it when you wanted however, was another thing altogether!

After fire came animal fats and oils, and candles.  Then, finally, came gas made from coal.  All of these methods to create light, however, relied on a flame.  Many experiments involving lightning and electricity took place but it took over 300 years to get to where we are now where electricity can be stored.

Whilst the arc lamp excited many, the production of electricity was still in its infancy with huge questions that we don’t give a thought to today. We know there is electricity coming into our homes and that electricity is also available via batteries for our portable equipment, but we rarely consider the difference between the use of alternating AC current in our mains supply and the direct DC current from the batteries.

Both will provide light via a now ‘old fashioned’ bulb; the latest LED’s work economically to produce light, but only at low voltage.  It was discovered that resistance would cause an electric to heat up and ‘glow’; this is where the name ‘glow lamp’ of early bulbs originates. The glowing material, however, had a very restricted life.  This prompted further developments and the beginnings of the bulb and slowly a more practical model with longer life evolved.

Only a very few houses in the 19th century would have had electric lighting in any form. The first houses, now owned by the National Trust, to be properly lit by electricity were Cragside in Northumberland (lit in 1878), and the Arts and Crafts House, Standen in Sussex that was completed in 1894 was built with only electric lighting.

How electric lighting changed our lives

In the home, in particular, the advantage of an electric light over the gas lamp was especially obvious because it was enclosed and didn’t carry dust upwards to mark walls and ceilings.

However, the biggest advantage was the ability to switch the lights on and off; something we take for granted now but that was a monumental shift at the time!  Remote switching and ignition for gas lamps was developed, but only as a catch up to electricity and it was complicated and expensive in comparison so never really took off.

When did gas lighting end?

Because the gas industry was far larger and more active in street lighting than the growing electricity industry (and the infrastructure was all in place), it took until the period between the wars before new built homes did not automatically have gas lighting points built in. The electric home lighting could then be considered common, but street gas lighting was still holding sway with powerful street lamps made to light the new arterial roads that were coming into use.

William Sugg & Co. Ltd. continued to develop lamps and huge numbers of street lamps were brought back into use after the wartime ‘blackout’ was lifted. However, some areas took the opportunity to replace their gas lamps with electric rather than repair them which hastened the end of gas street lighting as the ‘norm’.