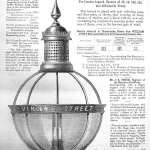 The ins and outs of the first gas street lights

The first gas street lights used to brighten up towns and cities across the world were lit by one single upright flame. This larger flame produced far more light than the previous oil lamps and was almost maintenance free. As the demand for more light increased, extra burners were added to increase the amount of light emitted from the gas lamps. Due to this, the size of the gas lamps also had to increase. Some of these gas lamps were more than 6 feet tall and 4 feet wide. These large lamps had to have a large post to support them and were only placed half as high as the street lights we see today.

In the late 1800s the gas mantle was introduced which emitted a much brighter light when heated by a flame. This meant that the much larger original gas lamps did not need to be as big now gas mantles were invented. In the early 1900s a gas mantle was introduced that could direct light downwards which became widely used in all gas lamps. Gas street lamps came in a variety of sizes and designs, many with various embellishments depending on the fashion at the time of production. In the early production of gas street lights, many Victorian style gas lamps were four sided glass lanterns which were made of metal and open at the bottom for ventilation. These types of gas lamps were in common use in the mid 1800s. 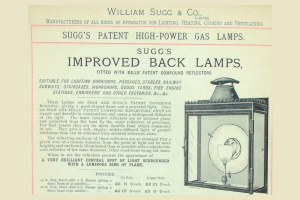 The first sign of gas street lighting that appeared in Britain was in 1807 in London’s Pall Mall. That year a line of gas street lights were illuminated to celebrate the birthday of King George III. Each lamp was fed with gas pipes that were made from the barrels of old musket guns that lit up the whole street with just one spark. In 1812 the first gas company called the Gas Light and Coke Company was founded which accelerated the worldwide use of gas street lamps in towns and cities. During the first few decades of gas street lighting, the lamps were lit by a lamplighter. The lamplighter would set off when the sun went down and would light all the lamps using a wick on the end of a long pole. They would then return at dawn to extinguish each lamp. Just over a century later, in the 1930s, the lamplighter was no longer needed as the clockwork controller was invented which lighted the lamps automatically. Street lights were lit by gas until the 1950s when they were replaced by lamps that used electricity. Now there are still around 1500 gas lamps that are operating in London, and many are maintained today by our lighting experts at William Sugg and Co Ltd.

Gas lighting is described as the production of artificial light from using a combustion of a fuel such as hydrogen, methane, propane or natural gas. Gas street lights were used to light up the streets of towns and cities across the world to help provide safety for traffic and pedestrians. Gas street lights were widely used in towns and cities up until the 1950’s when they were then replaced in most areas by electric street lights. Before the introduction of gas street lights, most streets were illuminated by candles, oil lamps or rushlights which gave a dim light and sometimes let off a lot of smoke. The demand for better lighting rapidly increased when more traffic was taking to the streets. This meant there was a higher demand for the streets to be lit for longer to provide more safety for towns and cities.

At William Sugg and Co Ltd we pair the past with the present with gas lamps and their technology. We offer gas lamps of all styles and materials to help you create your desired heritage atmosphere. Get in touch with our team of lighting experts today to discuss your options.  For further information on the history of gas lights, visit the William Sugg History website.