The meaning and history of Flambeaux Lighting 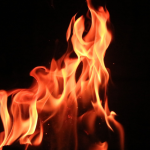 Flambeaux lights are a striking feature in whatever setting they appear.  Although they’ve been around for a while, the effect is as dramatic now as it was originally.  We take a look at the history of the flambeau light and associated lighting design, as well as the meaning of the name itself.

The flambeau meaning is derived from the french word ‘flambe’ meaning flame. The flambeaux tradition dates back to 1857, where wooden torches wrapped in lit rags were used to light the procession during the first Mardi Gras in New Orleans, USA.

Originally, the torches were used to ensure revellers could see the carnival parades during the night and were carried by slaves and free men of colour to directly reflect the racial segregation and discrimination in the USA at the time. This soon changed and the men carrying the lights took to dancing down the streets as a form of entertainment.

With the evolution of lighting infrastructure, many would believe that flambeaux lighting is a thing of the past. However, the use of this eye-catching open flame lighting is still used in this modern day as a symbol of celebration and many models of flambeau have been developed for a wide range of applications.

Flambeaux lighting can come in a variety of forms. The main feature of a flambeau light is the open flame which is fuelled by gas. The size and shape of the light depends on what it is being used for. Our flambeaux lighting can come in several different shapes and sizes including a bowl, a cone, a stoke or in a medieval style and bespoke and one-off designs too. Each of these are made from materials such as stainless steel, copper and aluminium to suit the desired atmosphere and design brief. The gas lights can be fixed to walls using a wall bracket, to the ground using a plinth or a podium, or can be placed in water.

Where is flambeaux lighting used?

Flambeaux lighting has been developed to have a wide range of uses. Some uses include indoor and outdoor home decoration, carnivals, festivals and film sets. One of the most famous uses of flambeaux lighting is the Olympic torch, however this is lit naturally through the sun’s rays and a parabolic mirror rather than gas.

How is flambeaux lighting used?

Originally, the flambeau carriers wrapped the wooden torches in lit pine-tar rags and were dressed in robes and turbans to protect them from the dripping torch fuel. However, now the lights have evolved to be a lot safer by using oil-burning lanterns which are mounted on metal trays and long poles to prevent the carriers being burnt by the flames. All flambeaux lighting from William Sugg is lit by using either natural gas or LPG (liquid petroleum gas).

We have a wide range of flambeaux lighting that you can take a look at and here are some of our favourites: 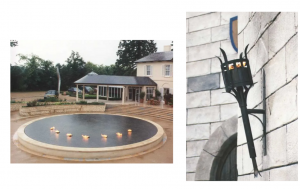 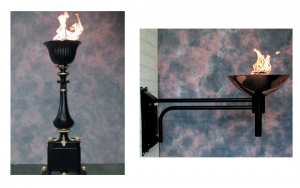